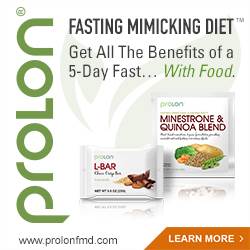 The Energy Blueprint
by Ari Whitten

Chronic lack of energy has become an epidemic! And it’s wrecking people’s lives.

People are tired… They’re sick. …They’re stressed. …They’re exhausted. … They’re anxious and depressed. … They come home and they don’t feel like being with their family, and they don’t have the drive to spend quality time with them. And they’re usually just trying to drag themselves through another day with caffeine. This is why so many people are hooked on caffeine—because they just don’t feel the energy we all used to have when we were young. So they’re constantly borrowing energy from tomorrow to pay for today, with caffeine, sugar or stimulants.

In short, people are becoming bankrupt in the most essential ingredient to having a good life—physical energy and vitality!

And the unfortunate reality is that not only has this become an epidemic, but there really hasn’t been good information out there on this subject…

There are lots of different names and variations for these fatigue problems… Burnout syndrome, stress-related exhaustion, adrenal fatigue, and we even severe debilitating conditions like chronic fatigue syndrome… By the way…

But CFS and FM are just the tip of the iceberg of the fatigue epidemic. Fatigue is a spectrum – from severe debilitating chronic fatigue, to mild or moderate burnout or stress-related fatigue/exhaustion.

CFS/FM is a reflection of the “worst case scenarios” of the human energy crisis. They are the canaries in the coal mine. These are just the small portion of people most sensitive to what’s causing at least some minor fatigue in almost EVERYONE. There are 50x-100x more people with mild or moderate fatigue that is not yet totally debilitating.

Here are some scary stats to think about…

But because it’s so common, people don’t even realize that there is anything wrong with being fatigued all the time…

The truth is that fatigue, burn out and exhaustion are now becoming so common that people are accepting it as NORMAL in our society.

Fatigue is typically explained away as an inevitable consequence of working hard and being a parent, stress, having too much to do in too little time, and dealing with the many demands of modern life.

Being overworked and sleep deprived, and pushing through chronic lack of energy is even seen as a badge of honor by some people – it’s mistakenly viewed a sign of how driven and tough you are.

Of course, feeling tired and wanting to lay down and rest after a long day of hard physical and mental work is totally normal…  But being fatigued or feeling drained constantly is most definitely NOT normal.

It’s your body crying for help!

So how do you know if you just have normal tiredness OR the kind of fatigue that is a sign of something much more dangerous?

Here’s how to know…

Do these symptoms sound familiar?

If you have a combination of fatigue/exhaustion during the day, anxiety or brain fog, plus sleep problems, then you have Chronic Fatigue. (In other words, your body and brain are in a severe state of dysfunction that is far beyond NORMAL tiredness.)

And if you’ve got post-exertional malaise or widespread body pains in addition to all that, then you likely have full-blown chronic fatigue syndrome or fibromyalgia.

If you have these symptoms, this is NOT something you want to ignore and keep pushing through as you try to get things done. That is a terrible mistake.

If you have these symptoms, it is a sign that things have already progressed so much that the cells of your body and brain are already in a state of serious dysfunction. And unless you do something to fix that dysfunction, it will only get worse – until it eventually results in disease or debilitating chronic fatigue, or both. And it will likely wreck your life along the way…

You may think you’re pushing through and being tough and still getting things done, but here’s what you don’t realize…

When you’re dragging yourself through the day, you become HALF the person you’re capable of being.

What Conventional Medicine Has to Offer People With Fatigue

According to the latest review of the research published in the peer-reviewed journal, American Family Physician, conventional medicine does not know what causes fatigue and basically just shoots for symptomatic relief (which it does not do very effectively). (R)

Here’s what the best of modern conventional medicine has for people with fatigue:

That’s it! That’s the best of modern medicine. That’s not my opinion – that according to their research and recommended practices. (R)

There’s one more thing I want to mention here: Blood tests are notoriously worthless in people with fatigue.

People go to their doctor looking of answers, and thinking that the best of modern medicine and advanced science will certainly have amazing answers for them. They imagine they’ll do a blood test, and it will clearly show what’s going wrong inside their bodies.

The 5% are usually things like diabetes, heart disease, anemia or hypothyroidism, or they might find that the fatigue is a side effect of a drug you’re already taking. (E.g. They would likely prescribe metformin, statins, iron or thyroid hormones.) But in the vast majority of cases, they don’t find anything helpful on blood tests for people with fatigue.

So that’s what they have… that’s literally the best that modern conventional medicine has for people with fatigue. They can do blood tests (which have a 95% chance of not finding anything that will lead to any useful treatment). And the 4 options they have are antidepressants, exercise, CBT, and stimulants.

Unfortunately, the natural health (holistic and functional medicine) – which I generally associate with – also do not have very effective answers for people dealing with fatigue. Their thinking on this topic has been dominated by the “adrenal fatigue” theory which centers around the role of the adrenal glands and cortisol as being the central players in fatigue.

Unfortunately, there is a big gap in understanding on this topic between those in the functional/holistic medical communities and the actual scientific evidence on this topic.

I’ve done literally the most extensive review of the evidence on this subject – examining over 25 years of research from all over the world that has assessed the relationship of cortisol levels with various fatigue syndromes. This was over a year of work to do. But let me sum it up for you here in just a few sentences:

There are 20 literature reviews (where researchers compile the existing evidence):

Unfortunately, holistic/functional medicine decided some years ago to get married to the adrenal fatigue theory and that cortisol levels and adrenal function were the key players in the fatigue epidemic. The science has shown that view is simply not correct, yet, most people within those communities still carry on practicing within the adrenal fatigue paradigm.

Ultimately, this is why I describe fatigue as an epidemic hiding in plain sight, that has not had good answers.

I believe we can do better than this. Much better. This is why I started The Energy Blueprint – to build out a new, science-based, and actually effective paradigm of fixing fatigue and increasing energy levels that addresses the real root causes and actually works.

The New Paradigm of Fatigue and How To Fix It

In just the last few years, research is building out a new understanding of the fatigue epidemic, and I believe that the new paradigm of fatigue that will dominate medicine in the coming decades centers largely around our mitochondrial health. I believe that our mitochondria – our cellular energy generators – are the key players when it comes to the fatigue epidemic.

Research has now shown that our mitochondria are not just mindless energy generators (as has long been thought), but are actually exquisitely sensitive environmental sensors. (Robert Naviaux, MD’s work on the “Cell Danger Response” is the seminal research in this area.) The mitochondria are the first thing sensing what’s going on in our bodies – e.g. inflammation, psychological stress, toxins, etc. – and then literally communicating back to the nucleus of the cell, and dictating our gene expression in response to what they’re sensing about the environment. (R) (R) (R) (R) (R) They decide whether the body stays in “Energy Mode” or shift the body into “Defense Mode” to devote energy and resources into defending against threats. I believe that this is the central key that dictates whether you have a high energy body or a fatigued body.

New research in positioning our mitochondria as being the key player in things like: 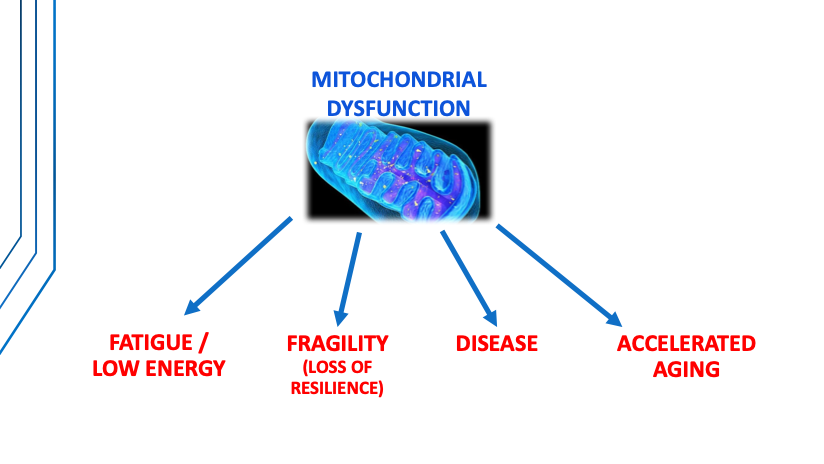 The key is that depending on our how big, strong, healthy and robust our body’s mitochondria are, stressors can either overwhelm our mitochondria’s capacity to deal with stress – and thus lead to fatigue, fragility (loss of resilience), depression, anxiety and brain fog. Or, our mitochondria can cope with the stress load and maintain homeostasis. 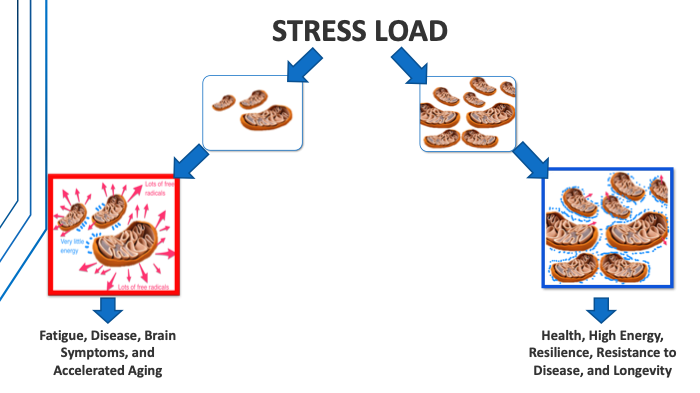 I call this the body’s “Resilience Threshold.” And it is directly dependent on how strong your mitochondrial system is. The stronger the mitochondria (and the more of them you have), the more your body can tolerate the stressors of life and maintain a healthy brain (i.e. no depression, anxiety, brain fog, etc.) and a high energy body. 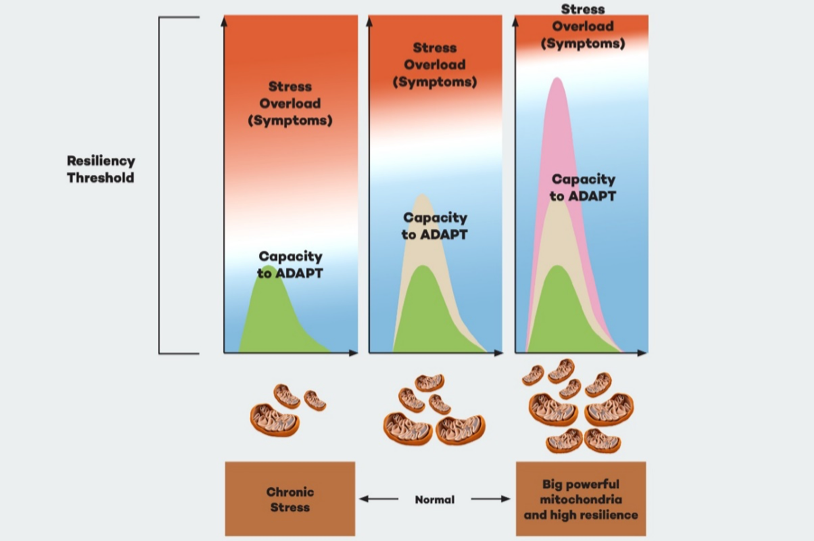 There is obviously much more to be said about mitochondria and the causes of fatigue — and how to fix it – than can be written in a few page article. This is my life’s work, and the core of everything I do in my work with The Energy Blueprint. This is why I started The Energy Blueprint – to bring a new, paradigm to the world based on cutting-edge science, showing exactly how to overcome fatigue and increase energy levels.

In just the last few years, Ari’s Energy Blueprint system has helped thousands of people overcome fatigue and supercharge their energy levels. Check out his book, The Ultimate Guide to Red Light Therapy on Amazon.com, and go grab his free 4-video “double your energy” masterclass (valued at $199).